The store will not work correctly in the case when cookies are disabled.

A History of Respiratory Diagnostics

A History of Respiratory Diagnostics

Modern respiratory diagnostics owe much to key findings unearthed as early as around 150 A.D. when Greek philosopher Claudius Galen was recorded as experimenting on human ventilation by getting a child to breathe in and out of a bladder. In 1679 Swiss physician Theophile Bonet used the phrase ‘voluminous lungs’, to report findings of emphysema during autopsy. In 1681 Giovanni Alfonso Borellii measured the volume of air inspired by sucking a liquid up a tube. René Laënnec, the inventor of the stethoscope, identified emphysema as a component of chronic obstructive respiratory disease (COPD) in 1821. He correctly cited environmental and genetic factors as the principal cause of the development of COPD.

It is generally agreed that the father of spirometry was John Hutchinson, a London surgeon. He presented a paper in 1846 to the Royal Medical and Chirurgical Society of London, ‘On the Capacity of the Lungs, and on the Respiratory Functions’, with a view to establishing a precise and easy method of detecting disease using his spirometer.

Hutchison measured the lungs of over two thousand people and coined the term ‘vital capacity’ (VC) i.e. the capacity to live. He recognised that the volume of air that can be exhaled from fully inflated lungs is a powerful indicator of longevity and classified people by their occupation. Hutchinson’s exacting observations showed that in normal subjects the VC is directly related to height, and inversely related to the age of the individual. Weight has only a minor effect on the vital capacity, but he observed that vital capacity became mildly reduced following a large meal. Much later the concept of the timed vital capacity gave us spirometry as we know it today. 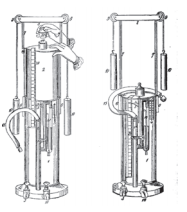 The Hutchinson spirometer featured an inverted bell sealed by water and was capable of giving fairly accurate static lung volumes. It was developed as a calibrated device and commercialised for use in laboratories. This spirometer led to the development of many models of water seal spirometer which could measure dynamic as well as static lung volume. Water seals were eventually superseded by bellows and rolling seal spirometers, both of which could be oriented horizontally or vertically. Accurate volume displacement spirometers are still available today and regarded as the ‘gold standard’ for spirometry measurements.

The term forced expiratory volume was coined by the British Thoracic Society in 1957, following the work of Tiffeneau and Pinelli of Paris in 1947. This added the parameter ‘timed vital capacity’ to spirometry. ‘Volume expiratoire maximal seconde’ is sometimes still called the Tiffeneau value in France today. Forced vital capacity (FVC) and FEV1 together are useful in identifying patients at risk of many diseases, including COPD, lung cancer, heart attack, stroke, and all-cause mortality.

In 1959 Dr Martin B Wright and C B McKerrow introduced a peak flow measuring device. This first Wright Peak Flow Gauge is a simple and reliable device for maximum flow rate assessment. Devices virtually identical to the original were still in use up to 2003 when a new standard Flow / volume graph Volume / time graph was adopted in Europe which made peak flow for a spirometer correlate with peak flow measurements from a peak flow meter. This is now ISO standard EN ISO 23747:2007. Vitalograph were the first to manufacture Peak Flow Meters to conform to this ISO standard, when it was a CEN standard in 2003.

In 1962 Dietmar Garbe produced the first spirometer designed for use outside the laboratory - an office spirometer called The Vitalograph. This was the start of the simple, single breath test. Today Vitalograph is the only British owned major spirometer manufacturer.

In 1972 an inventor’s anemometer for measuring the top speed of a skier caught the eye of Dietmar Garbe, whilst he was on a skiing trip. He took this idea and developed it into an inexpensive peak flow meter.

In 1980 the US Framingham study of over 5,000 men over the age of 30 years reported that the vital capacity is a powerful prognostic indicator of pulmonary disease and cardiac failure and can effectively select groups of persons heading for premature death. Since spirometric measurements predict cardiovascular as well as non-cardiovascular mortality, it is shown as a measure of living capacity, useful for insurance and underwriting purposes - affirming John Hutchinson thinking over 200 years ago!

In the year 2009 Vitalograph released to the market low cost, simple, accurate, handheld devices that report the key values FEV1, FEV1/FEV6 and comparison with predicted values. These devices monitor the quality of the blow and give a simple digital result. This development is set to bring the concept of pre -spirometry case selection into a new era. 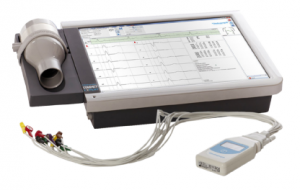 With the increasing problems of data and cyber security there is an increasing case for full Medical Workstations which are secure, self-contained medical devices incorporating all the functionality of a PC, so can be integrated into networks and are designed to exchange data with electronic medical record systems. One solution to this is the Vitalograph COMPACT launched in 2015.

Categories: General
Posted By: MidMeds
Search
Archives
Live Chat
COOKIE NOTICE
This websites uses cookies. By continuing to browse the site you are agreeing to our use of cookies.
Accept Decline More information
Cookie Settings