This entry was posted on September 6, 2018 by MidMeds. 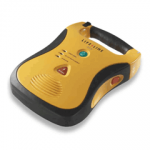 15-year-old Ethan Askew was a typical healthy teenager, regularly hiking and working towards his Duke of Edinburgh award. There was nothing to suggest Ethan would suddenly collapse during a sports class at school.

Ethan's father, Stuart, worked as a Premises Manager at the same school and when told his son had collapsed he rushed to the scene to find someone performing chest compressions on him.

The school, Steiner Academy, had recently applied to the British Heart Foundation for a community defibrillator for the village which was to be installed at the school, it had only recently been delivered and installed two days previously.

Stuart used the device which he described as "very easy" to use, and an ambulance arrived 5 minutes later and took Ethan to the hospital where he was put in an induced coma.

There are tens of thousands of defibrillators available in workplaces and in public buildings across the country, the difficulty is finding out where they are. NHS England and NHS Scotland are working with the British Heart Foundation and Microsoft over the next year to create a defibrillator database for the UK.

Tests on Ethan revealed that one of his coronary arteries was too narrow, caused by a random genetic condition. Ethan had surgery during which his artery was replaced and he has now made a full recovery.